My recipe is pretty much the same for both Mango or Peach Chutney.  The last few years I’ve had a hard time getting a decent volume of good mangoes.  Thus my batches have been smaller.  Now that I’m living in Niagara region with an abundance of mouthwatering, delectable peaches, I can make as much of the peach variety as my heart desires.  Or as it were, my stomach. 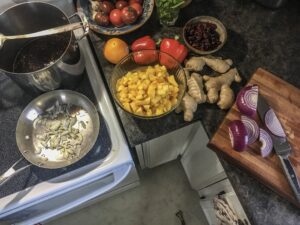 Last time I made peach chutney, the peaches were pretty ripe so the other day when we were out and about, I picked a couple of baskets of peaches that were still somewhat firm.  I figured that(hopefully) they would soften up a bit in the cooking.

I’ve made chutneys with Indian spices, curry and the like, in the past but I use some of that and a lot of mediterranean and African spices in my cooking.  So… I prefer to have something to offset that, cool things down as needed, and prefer to keep my chutney sweet.

The ingredients that I use are as follows:

5 Cups Brown Sugar - the two recipes that I used and most others call for huge amounts of sugar, way too much, I think.  One called for 6 cups of white sugar and six cups of brown sugar.  I have cut this in a little less than half and I much prefer the brown sugar for taste.  There is plenty of sweetness in the mangoes and peaches.

1/2 cup ground ginger(a couple of recipes call for this.  Use it if you have it - I just use the fresh ginger as noted below)

1 teaspoon of ground cloves(again, even with a half recipe, I use this volume)

16 cups sliced mangos or peaches.  Semi ripe.  (I get about 5-6 medium sized jars with this amount - see the photo)

If you want ‘hot’, you can add some chile peppers.

Or to taste add curry, turmeric or …  You can also add mustard seed.  Or as a friend of mine suggested, add an orange.  Peel and everything.  I have to check with her before my next batch but apparently one has to cut it very thinly.

And now for the cooking part:

I tend to do all my slicing and dicing beforehand.  If I have all of that done, I’m not in such a hurry and don’t make as many mistakes.  (As many!)

1. In a large pot combine vinegar, sugar, cinnamon, cloves, nutmeg and salt.  Bring to a boil and keep it there for about 1/2 an hour.  I’m never exact on these times and haven’t messed up yet.

2. I have the onions and garlic chopped and I sauté them before adding.  This definitely makes a difference in the final chapter.  I started doing this late in life(sautéing the onions) and boy what a difference in cooking in general.

3 Into the vinegar/sugar concoction stir in onions, garlic, cloves, nutmeg, salt, cranberries and red pepper(and whatever else).  Bring back up to a boil and keep it going for half an hour.

4. Stir in mangos or peaches and boil for a while again. 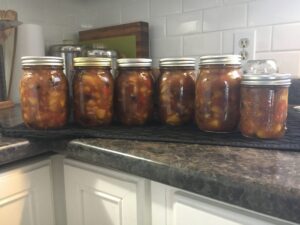 5. Have your jars all ready and scoop it hot into your jars one at a time leaving a little space at the top and seal them up as you go.  And let them cool.  You should hear the top pop as they cool. That’s when you know they are sealed.

At this point there are a bunch of websites that tell you to put the jars in hot water and let them cool more slowly.  I have no idea if this is better.  Do your own research on that one.

If you have enough, you can give some away.  I used to.  After a while, though, I realized most of the people that I gave it to, really don’t appreciate it as much as I do.  Some do. And they are allowed.  It is kinda like giving a kitten away to a good home.